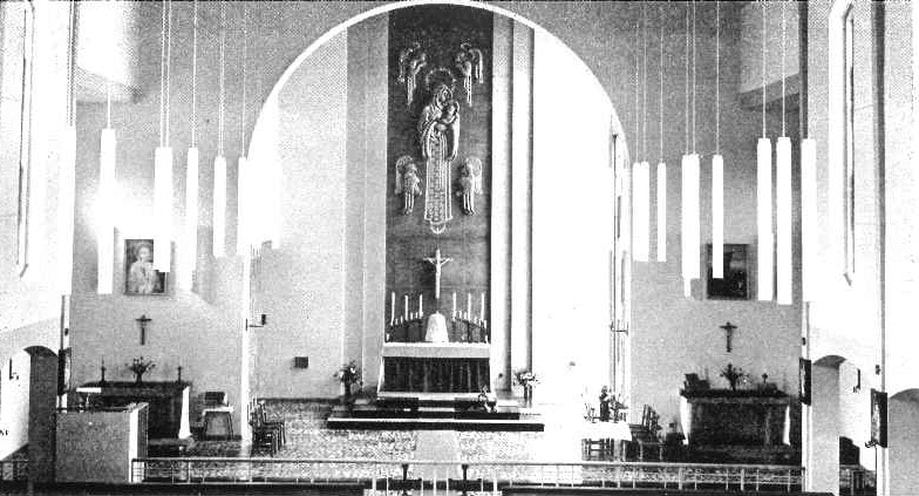 Pentecost brought the first good weather and the paving, tarmac and walling in front of the church was completed in time for the Civic Mass, the first major event to take place in the church. The next major project was the building of the St. Mary of the Angels School. The school was designed to be for 280 pupils although when it opened on 7th January 1964 there were 80 pupil on the roll. However, 6 months later this number had risen to 150. On 14th January 1964 Fr. Ephrem Conway wrote to Archbishop Grimshaw asking him to come to Aldridge to bless the new church and primary school.
The Franciscan Community in Aldridge in the 1960s and 1970s was usually comprised of 3 priests and a brother or 4 priests. Thus the Masses were frequent. A typical week would be as follows:
Sunday - Masses at 8am, 9.30am and 11.15am with Rosary and Benediction at 6.30pm.
Monday - Masses at 9am and 8pm.
Tuesday - Mass at 9am and Evening Mass at 7.30pm with Novena to St. Anthony and veneration of the Relic.
Wednesday - Masses at 9.15am [School] and 8pm.
Thursday - Masses at 9am and 8pm.
Friday - Masses at 9am and 8pm.
Saturday Masses at 8am and 9am. Confessions 11.30am - 12.30pm and 6pm - 7pm.
This move involved the lowest of the three Altar Steps being extended out beyond the Sanctuary Arch by some 14ft to create a new Sanctuary step on which to place the altar. Another significant change during this period came in September 1969 with the opening of St. Francis of Assisi Comprehensive School (now St. Francis of Assisi Catholic College) on Erdington Road.  The school was officially opened by Archbishop George Patrick Dwyer on 26th October 1971, and it continues to be of great significance to the education of the children of our parish and beyond to the present day.
Unwelcome and Unexpected News
In 1979 came a major unexpected and unwelcome change to the life of the parish. The parish notes for 19th December 1979 announced 'Fr. Provincial has informed us, as a consequence of Resolution 19 of the 1978 Provincial Chapter, the Friars will be handing over the care and charge of the parish to the Archdiocese in July 1980.  Fr. Provincial has told us that the date for the official handover of the parish is now April 19th'. Thus, on April 16th Fr. Fabian moved to Manchester. Fr. Norbert, who had served 3 separate spell in Aldridge, as a newly ordained priest in 1942, as Parish Priest when the church hall was built and opened in 1949 and in the 1970s moved to Clevedon. Fr. Con the Parish Priest, was to stay until the 1st week in June pending the arrival of the new Parish Priest. This parish owes members of the Franciscan Order a huge debt of gratitude for the work they carried out in Aldridge over a period of 40 years. During this time, with the dedicated support of many parishioners, the Presbytery (Friary) was purchased, 2 churches built and the Primary and Secondary School opened to serve the children of the parish. The spiritual needs of the parish were fulfilled with great devotion both within the liturgy and by parish visiting and many other activities.
Building on the Franciscan Legacy

In view of what was described as the perilous state of the parish finances [£10,200 was owed to the Franciscans] a committee was formed to arrange fundraising initiatives, starting with an Autumn Bazaar. It rapidly became apparent to parishioners that the Canon had a very structured and focussed approach to financial affairs. His primary financial objective was clear and timely. It was to clear the parish debt in order that the church could be consecrated. ​
In addition to Canon Hogarty's attention to many minor issues of church maintenance, two of his more significant initiatives have proved of long-term benefit to the parish. Firstly, the original heating system was proving unreliable, inefficient and expensive to run. In 1986, despite the fact that the parish finances were tight he made the decision to install a direct-fired gas heating system at the cost of £9000. Secondly, at a Parish Meeting on 18th July 1982 it was decided to remodel the existing Sacristy area to provide a day Chapel and Community Room. In 1993 this facility was extended and refurbished and officially opened with a celebration after Mass on Wednesday 8th of September, the date which had been decided upon to keep the annual Parish Feast Day. On June 25th 1995 in St. Chad's Cathedral John Higgins was ordained to the Permanent Diaconate. John presided at Night Prayer and Benediction in the church that evening followed by refreshments. By 1997 Canon Hogarty was showing increasing signs of ill health and on Sunday 31st August the Parish Bulletin announced 'Sadly, our Parish Priest Canon Laurence Hogarty died on Thursday last 28th August. Canon served this parish for 17 years and was a truly caring shepherd of his flock here in Aldridge. Please remember him in your prayers'. The Requiem Mass for the Canon was held on Thursday 4th September and he was buried at Streetly Cemetery.

Fr. Michael Leadbeater took over the Canon's Mass duties for 12 months during 2003/4 and Deacon John took up residence in the Presbytery to carry out the day to day running of the parish. 25th June 2005 saw the tenth anniversary of the ordination of Deacon John, to whom the parish owes so much, particularly for his work during the Canon's illness. Still there was more work done on the church and other facilities. During the summer of 2005 the roof of the meeting room was replaced, the meeting room was re-wired and the Sacristy was given new lighting and heating. In March 2007 a new font was placed in the Sanctuary and panels to match were added to the front and sides of the pedestal upon which sits the Tabernacle. The Canon's bulletin notes read 'I hope you agree that they enhance the Sanctuary area'. In spite of his increasingly poor health the Canon celebrated his 65th birthday with a party in the Friary Hall. On Wednesday 21st March the Canon celebrated his 40th anniversary of ordination with a Mass, celebrated by Bishop McGough, followed by a 'feast' in the Friary Hall.  Shortly after this the Canon's condition worsened markedly with almost continuous treatments and operations. The parish bulletin of 23rd January 2011 reported that the Canon had been seriously ill and it was announced that Fr. Leadbeater 'will be with us for the foreseeable future'. In early July 2011 Canon Hanlon announced that he would be leaving the parish to go to a care home in Coleshill until a more permanent place could be found for him at St. Joseph's, Harborne. He asked "Please remember me in your prayers as I will always remember you". The following week Fr. Michael Leadbeater announced that he had been asked by the Archbishop to become the new Parish Priest and he 'accepted willingly with a sense of joy'.

On the day the engineers arrived Fr. Michael received a frantic telephone call to let him know that large amounts of asbestos had been discovered under the floor boards and in the roof space of the house. Immediately every thing went on hold while this was removed at enormous cost. Eventually the heating system was installed, but because of issues arising from the works undertaken the house had to be redecorated along with some lighting upgraded.
Around 1,000 people took part with the people of the Syro-Malabar Rite being very much in evidence with colourful clothes and ceremonial umbrellas.
During the Jubilee Year Archbishop Bernard came to the parish to celebrate Mass to mark this important milestone.
Of course, like the Presbytery, the church building itself needed ongoing work. This included the organ being stripped down and rebuilt, the heating system being upgraded and the building redecorated. The piety stall area was improved, and the Relics of the Saints (which had until now been hidden away in the safe) were properly housed in the sacristy.
As a beginning the meeting room, located behind the Presbytery and connected to the church via the sacristy corridor, was enhanced with a new door giving disabled access. The footprint of the old building was given a temporary surface to allow for an unofficial car park with the addition of new security lighting, and an apparently dangerous-looking large sycamore tree was removed to give space for any future building.
The garden has matured beautifully. In addition a set of Stations of the Cross were fixed to the outside wall of the Sanctuary with the final station on the wall area of the Prayer Garden. Each station was donated in memory of a departed loved one and parishioner with a slate plaque recording their names as a permanent reminder.
He has many happy memories of life at the school with his association with students and staff. Canon Michael, whose age and health were catching up on him, retired in October 2018. He still has many friends in the parish with whom he maintains contact. Having retired in the parish, and living not far from the church, Canon Michael and Christine can still hear the sound of the church bell as it rings out the Angelus/Regina Cæli each day. Fr. Craig and the parish remain in his prayers.